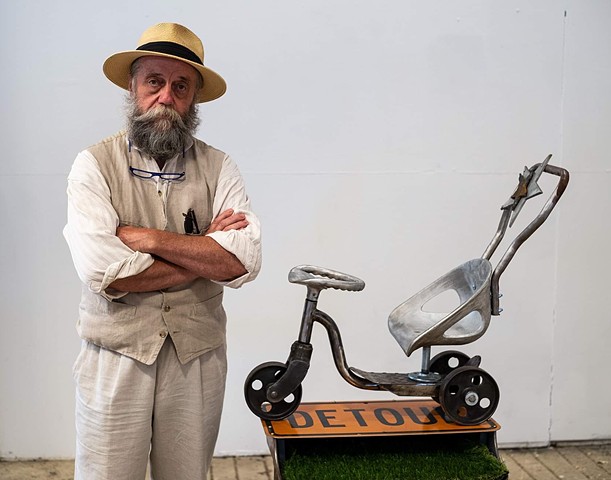 RICHARD CRIDDLE is a British sculptor who moved to New England in 1996. He now lives in southern Vermont and works in North Adams, Massachusetts.

He studied Fine Art Sculpture at the Central School of Art & Design in London where he received a BA (honours) degree, graduating on to the Royal College of Art to study bronze casting under Sri Lankan master founder Tissa Ranasinghe.

After teaching for several years in South Wales, Criddle returned to London to complete a three-year post graduate diploma at the Royal Academy Schools, funded by a scholarship from the Henry Moore Foundation.

During an immensely diverse career in sculpture, Criddle has worked as a college lecturer, an art fabricator, a foundry and studio consultant, a model-maker, an artisan, and a foundry-worker in the United States and the United Kingdom. He established bronze foundries for both academic institutions and commercial enterprises. Between 1988 and 1994 his successful company Mentmore Sculpture Services Ltd. executed a wide range of commissions for clients such as English National Opera, the Archbishop of Cyprus and Pinewood Film Studios.

Criddle has exhibited his sculpture throughout the U.K., including twice at the Royal Academy of Arts in London, and in the U.S., most recently at the Massachusetts College of Liberal Arts' Gallery 51.

Richard Criddle was formerly the Director of Fabrication & Art Installation from 1998 until 2021 at the Massachusetts Museum of Contemporary Art.