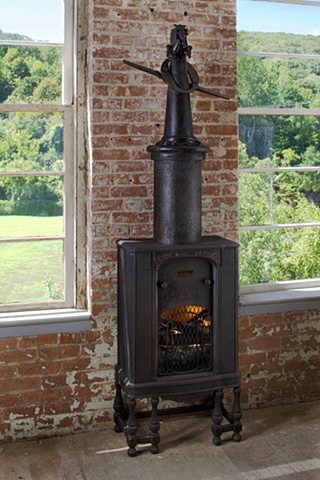 Cast in bronze, she is burning to speak. She is a gossip. She is a busybody; a loud mouth and a spreader of rumors and lies.

Her position, like her opinion is fixed and rigid, unshakable and her wingspan is ready to cut you down like a machete. She wears a skirt fashioned from a megaphone, an accessory required for speaking to the crowd and communicating her pungent doctrines from the soapbox. Her arms are assembled from “spinnings and turnings” (to spin a yarn or to turn the truth about) of furniture fixtures, articulated in order to powerfully persuade.

Her voice is amplified through the lower jaw-bone of a sheep, but she is no ordinary sheep who follows the rest- but a sheep who speaks - who stands up to be counted. It could never be the bleat of a mere sheep that would emanate from this figure. She stands upon the scorched and charred wire-less receiver from which she only broadcasts. Her words like embers stir in the stove, fueled by other people’s business.

She is not a “Universal Soldier” but more a “timeless suffragette”, a pundit, a performer, a proclaimer and probably a neighbor.