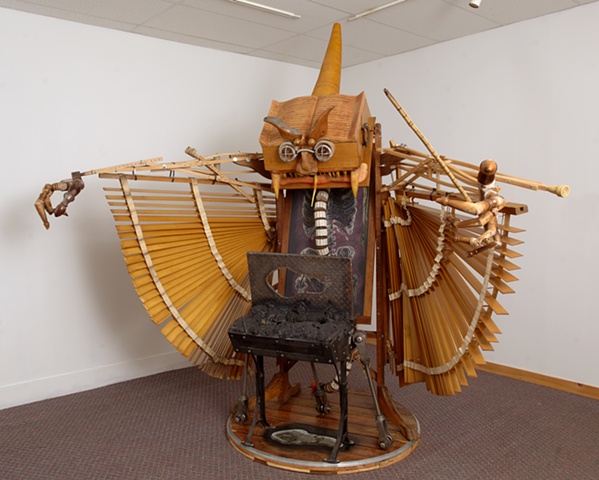 “Truly, sculpture is always going on. With proper physical circumstances and the visual invitation, one simply joins in and makes the work” Barry Flanagan

I grew up in a coastal resort town, Southend-on-Sea in Essex, England. The boys’ secondary-modern school that I attended from the age of eleven to seventeen was a strange place, a mixture of old and new buildings in a predominantly working class area. It was staffed by an odd assortment of “fossils” who specialized in the finer points of indoctrination, intimidation, victimization and sadism.

A good, provincial, English education. We were shackled by heavy and invisible bonds. We were the “lost boys” but we had no Peter Pan to guide us to Never-Never Land. Maybe a momentary crystal fantasy could settle for a second, but then sink into the leaden well.

I sat at desks with iron legs, (useful for wrapping your numbed fingers around after you’d received a whacking across both hands). I carved my marks into the history of their grainy surface. For years I wore out the elbows of my blazer, leaning on the lid whilst gazing at the patterns of the raindrops on the windowpane.

“Criddle! You boy! You miserable specimen!”

He snapped his fingers loudly, smashed his fist down on the lid of his own desk and simultaneously lowered his crippled leg with a thump upon the wooden classroom floor. He knew we all called him “Peg” behind his back. The man was a monster, the very thing my worst nightmares are still made of.

He moved between the rows of other desks, fellow pupils frozen still, heads down, so glad when he had passed,

The monster was coming straight for me.