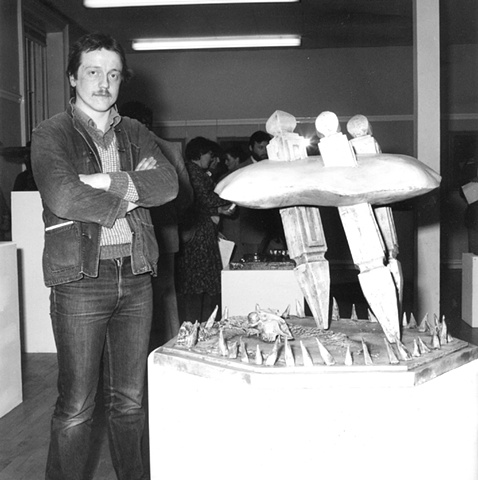 Richard Criddle , a craftsman in bronze, a sculptor from Southend , the Central School, the Royal College of Art, from studios in the East End of London, distanced from the mechanical human and (easier economic) dynamics of the city , now teaches at the Dyfed College of Art. His work has changed unexpectedly in it’s new environment of West Wales; it has gained in vigour , in its volcanic formidable struggles with metal and fire , yet its physical confrontations have been drawn further by the no less titanic powers of the wind and clouds and rain , with a singe of awe and mystery compressed and yet held tentatively in a surrealist embrace, formed with humour and with the discoveries of his dog and his heart.

In Richard’s work are the echoes of Neolithic monuments isolated by time , their scale over-whelmed by the growth of man’s ambition, There is sunlight driven into once molten metal; there are beds of railway lines as archeological as the most ancient of stones, their numerology to be as mysterious as runes. Bronze with all the hardships of its making becomes green stone; clouds are metallic mattresses, their rain more deadly than sharks teeth, the land they rain upon brazen, burnt, deformed, as alluring as the moons of Jupiter but made alive by an alchemist’s transmutation.

Review by Jeremy Roberts of the exhibition at Carmarthen Museum published in the magazine of the Association of Artists and Designers in Wales, June 1981.