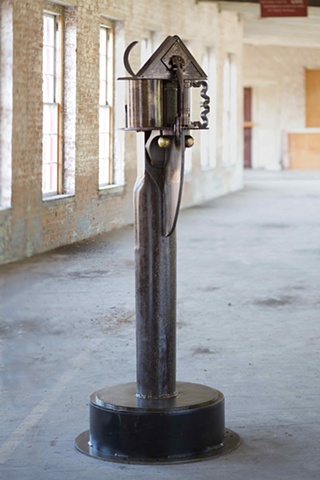 Reading (and being read to) the stories of Homer, the tales of the ancient Greeks such as Achilles, Hector and Ulysses were fascinating to me as a child. Learning of the siege of Troy, the gods, and the Cyclops formed an entire world of fears and dangers, complete with the sounds of clashing swords within my “minds-eye”. My imagination gave form to the legends and the power of these images together with fearsome detail would become more vivid as my eyes closed at night. Thoughts and dreams could not be separated. No picture book illustration or Hollywood manifestation came close to my mind’s pictures.

The proud dwelling of the mortal hero and his family is an architectural beauty, a folly, with an air of foreboding and tragedy. Death is always near, waiting just below the surface. The long face of grief, sadness and loss is greater in scale than the house itself…looming large and ready to take it’s chance, like a demon from hell. All is metal, heavy, cold and hard. The spear is propped in the niche of the column. Was it forgotten altogether? Was it disgarded consciously by the hero; not required for the duel of the titans. Was it a fight or a sacrifice?